The City of Prince Rupert’s Statement of Financial Information shows that more than twice as many city employees make over $75,000 than in neighbouring Terrace, despite only having 1,000 more residents.

The 2011 Statement of Financial Information lists 45 people who work for the City and make more than $75,000, while the City of Terrace lists 17 people who make more than $75,000. Of those 45 people, 12 city employees make more than $100,000, with City Manager Gord Howie and Chief Financial Officer Dan Rodin being the highest paid employees at $154,008 and $136,627 respectively. The City Administrator hired to replace long-time administrator Ron Poole in Terrace was to be paid $140,000, while the Director of Finance for the City of Terrace made $103,605.

The payroll for employees making over $75,000 in Prince Rupert is more than double that of Terrace, sitting at $4.18 million compared to $1.62 million.

One notable difference between the two communities is the fire department. While 14 firefighters in Prince Rupert are among those making more than $75,000 per year, with two long-time firefighters and Fire Chief Dave McKenzie making over $100,000, the City of Terrace fire department has few full-time staff and relies on a volunteer force of around 25 people for the remainder of the task. In fact, of the 17 people making over $75,000 in Terrace, seven of those are firefighters. 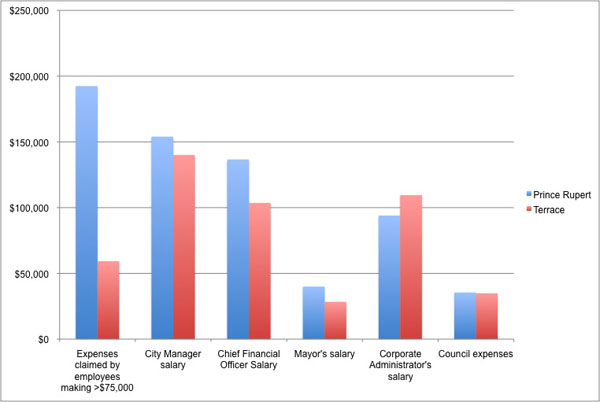 As for the elected leader of the City, Prince Rupert mayor Jack Mussallem was paid $39,956 while mayor Dave Pernarowski was paid $28,374. The four returning council members – Anna Ashley, Gina Garon, Joy Thorkelson and Nelson Kinney – each received $12,399 and each had over $4,000 in expenses. Expenses for the two councils were almost even with Terrace council having expenses of $34,833 and Prince Rupert council having expenses of $35,450.